The Garden in May

I was talking to my dad in England on the phone yesterday and he commented "I was looking at your blog yesterday and you haven't updated it in a month!!"

Consider me chastised!  You would think, since I'm currently not working full time, that I would have all the time in the world for things like blogging.  But to tell the truth, since we've been having (so far) a very mild, pleasant spring, I've been more inclined to be outside walking or puttering in the garden than to be inside writing about it.

But in the last couple of days it has felt like summer has arrived in the Houston area.  The temperature has crept up and so has the humidity.  So today I went out early for my walk, and now I can sit in the cool and write about the garden! 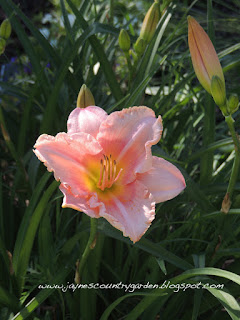 The daylilies in the island bad are coming into their glory.  We have a number of different varieties, none of which I can remember the names of now.  I'll call this one "Peaches & Cream" - I'm sure it won't mind. 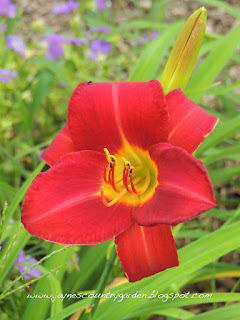 This is another variety I don't know the name of. Earlier in spring I divided this one and put some of it in the other island bed.  The newly planted cutting hasn't started flowering yet, but the original is bursting into bloom. 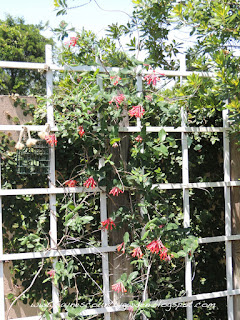 The other day I was sitting having breakfast when I caught sight of a hummingbird flitting from bloom to bloom on the Major Wheeler honeysuckle.  Naturally, my camera was not handy!  But at least I know there are hummers around now and am in the process of making some nectar to fill my feeders to put out today. 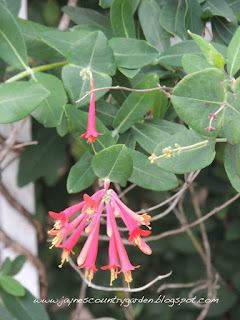 Here's a close up of the native honeysuckle.  I'm glad it's finally doing something.  I planted it three years ago and it was very puny for a while.

I was reading somewhere that this particular vine is not the sort that will vigorously cover a trellis so it's not great if you want it to hide an eyesore.  As it happens, I have creeping fig growing on the sound wall behind it and the combination of the two vines looks rather attractive and hides the ugly sound wall. 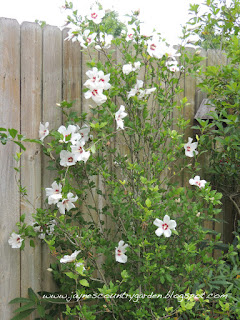 The Rose of Sharon is also bursting in to full bloom.  This has grown from a cutting I bought with me from my previous house, when we moved here eight years ago.  It's a favorite of bees and hummingbirds. 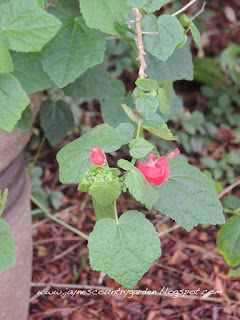 Here's another hummingbird favorite, Turk's Cap. I have a bit of a dilemma with this.  It's in a container, but managed to pop a root through the bottom of the pot and is now rooted to the ground.  It probably needs to be either repotted or planted in the ground somewhere (if I had anywhere for it) but I would probably kill it in the process.  So I'll leave it where it is for as long as it lasts and then replace it when necessary.

Well today is Friday the 13th, which means that Sunday is the 15th - Garden Blogger's Bloom Day, hosted each month by Carol at May Dreams Gardens.

I'm going to link this post up with her May Garden Blogger's Bloom Day when she puts it up.

This post is also linked with the following memes:

Today's Flowers hosted by Denise at An English Girl Rambles.

Words and photographs by Jayne Wilson, Jayne's Country Garden.
Posted by Jayne at 11:30 AM

My goodness - we are only just coming out of our wintersleep [ in the 'old country' and you have full-on summer.
Yes, I was hoping to upload to the 15th, but I haven't found them very welcoming so far. May the participants don't like my plants.
Love that unusual climber -

Thanks for stopping by Joanna. Coming to Texas from England, where I was born and raised, was quite a culture shock, in a lot of ways, let me tell you!

For a start I arrived here in August, which has to be the most brutal time of year, climate-wise and it took me a long while to get acclimated.

But we do have the benefit of mild winters, along with pleasant autumn and spring seasons. (Our spring temps are about the same as summer temps in England).

So if we can just bear it through the summer, the rest of the year makes up for it.

Your blooms are lovely. I especially like the honeysuckle. I lost mine a couple of years ago, but I bought a new coral honeysuckle this spring. It hasn't taken off yet - they do take a while to get established - but I'm looking forward to some blooms later.

I would actually encourage you to go ahead and plant the Turk's cap in the ground. They are tough and even if you have to do some root pruning, it will probably be fine as long as you keep it watered until it gets established.

A Brit in Tennessee said...

I'm not sure if we are in the same gardening zone or not, but you seem to be on track with all of the flowers blooming in Tennessee.
Isn't it all so encouraging !
Your flowers are stunning, thank you for sharing their beauty.
~Jo

You getting chastised by your sweet father gave me a smile. Sounds like he enjoys your blog and missed the updates. The nicest of compliments.

Your flowers are gorgeous Jayne, so healthy looking. I am going to be a bit cheeky and ask/invite you to link with my meme, Today's Flowers. No pressure of course but just in case the link is http://anenglishgirlrambles2016.blogspot.com/2016/05/todays-flowers-408-may-13th-2016.html

Thank you for considering Jayne and I wish you a very happy weekend.

Thanks Dorothy -- I'll have to see if I can find somewhere for the Turk's Cap that isn't full of roots already. And a nice cool day would be convenient too :-)

I'm in the Central timezone Jo - not sure if Tennessee is Central or Eastern. Thank you for stopping in for a visit.

Hi Denise. Thanks for inviting me to link up with Today's Flowers. I'll be happy to do that :-)

That first daylily is so pretty and delicate. I really like your Rose of Sharon, too. I’ve never had one of those but I wish I had a place for one. Happy Bloom day!

Amazing colour on those day lilies, Jayne!
Many thanks for linking up with the Floral Friday Fotos meme.

A Brit in Texas 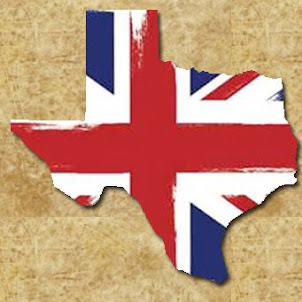 Jayne
Originally from England, I have lived in the Houston area since 1982.

My husband Eric and I live in the small town of Tomball, Texas, just outside of Houston.

I've had a love of gardening since I was little and am now enjoying the challenge of creating a serene garden retreat and wildlife habitat at our new home.

Jayne's Country Home - learn more about me on my personal website 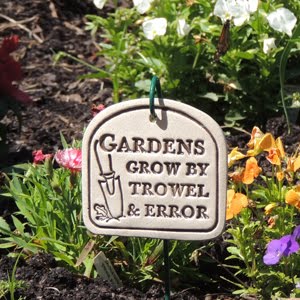 The Weather in My Garden

I'm in the garden! 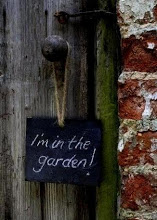 Garden for Birds, Bees and Butterflies 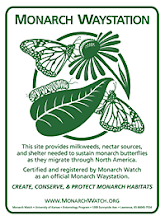 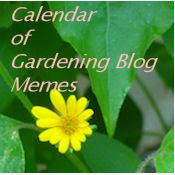 My Zazzle store has a growing variety of items I have created featuring my own original artwork created in DAZ 3D, Bryce and Vue Esprit